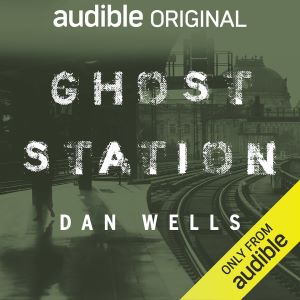 Ghost Station opens two months after the construction of the berlin wall. Wallace Reed is a member of The Cabin, a listening station manned by a joint US-West German intelligence task force. They, along with the rest of the western intelligence apparatus, were caught by surprise by the construction of the wall, and are now desperate to discover what else the Soviets have planned.

Everything is turned on its head when Wallace receives a strange message from a shadowy contact known only as Longshore. The message suggests that something has gone terribly wrong. Has Longshore been turned? Is he dead? Or is he trying to signal a mole inside The Cabin?

Dan Wells is probably best known as a writer of horror fiction, and this certainly informs the writing style. There is a claustrophobic dread to Wallace’s experience; beginning with the barricaded “Ghost Stations” through which he commutes each day, to the growing uncertainty about who he can trust. In this respect, Ghost Station is as much a whodunit as it is a thriller. As Wallace investigates the possibilities, no one, not his contact, his boss, his lover, are exempted from his growing paranoia.

If you pay close attention, you can probably unravel the plot before the final reveal; and this is one of the reasons I loved this book. In many thrillers, across many mediums, mystery is generated by cheating. You look back at the story, once you know the ending, and you see that the actions of the characters were driven by plot apart from motive, i.e. their actions are mutually contradictory. This is not the case with Ghost Station and one of the reasons why I gave it a five-star rating. At the end of the book you will be able to say everyone acted according to their character and motives.

My final plug for this book relates to the fact that it does what all good historical fiction should: It made me want to go and research the history behind the novel. I now know more about the Berlin Wall, the “Ghost Stations”, and even cold war cryptography, than I ever would have had I not picked up this book.

For those who care about such things, here is my semi-arbitrary Parental Guidance Rating: 13+ for Mature Themes