"Life’s What You Make It" - A Review of Chasm City 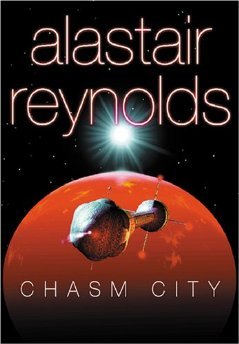 I was first introduced to the works of Alastair Reynolds via a WPLC algorithm. On the recommendation of a friend, I had placed a hold on the audiobook edition of Pandora’s Star by Peter F. Hamilton. Whenever you placed a hold, the website would recommend four additional titles that were available for immediate checkout. One of those titles was Revelation Space by Alastair Reynolds. The title, with its apocalyptic vibe and minimalist cover design, intrigued me so I picked it up. I began to listen to the book on my next drive into work and was immediately entranced. I devoured the book and quickly checked out the next volume: Chasm City.

Chasm City is the book that I recommend as the starting point for anyone who plans to dive into the works of Alastair Reynolds. First and foremost because it is my favorite of his novels; but it also highlights the strengths and weaknesses of Reynolds’s writing style, which is to say if you like Chasm City, you will probably like everything else he has written.

The book begins with the arrival of Tanner Mirabel at Yellowstone; a human colony thrown into utter chaos as a result of nanotech virus called the melding plague. He is on a mission to avenge the death of his former employer’s wife a task made difficult by the current crisis. Intercut with this narrative are two other stories. Through flashbacks we learn Mirabel’s backstory in the jungles of Sky’s Edge. The reader also, via the hallucinatory effects of an indoctrinal virus, unravels the tale of Sky Haussmann the founder of the Sky’s Edge colony.

Reynolds does a marvelous job juggling these three separate timelines. Each location from the alien jungles of Sky’s Edge to the claustrophobic corridors of the Santiago are each painted in vivid detail. But it is the eponymous Chasm City in which Reynolds true talents as a writer are revealed. “It looked almost normal: a phenomenal mass of immensely tall buildings compressed into festering urban density, like a glimmer into the innards of a fantastically complex machine. But there was something queasily wrong about those buildings; something sick about their shapes, contorted into forms no sane architect would have chosen.” The city’s nanotech has run amok and the buildings whose smart frames were infinitely malleable are now a tangled infected warren. In the uppermost layers the elites fight to retain a shred of normalcy, while below in the “mulch”, society has reverted to the primitive expediency of steam power.

The book is populated with a memorable cast of characters who range from human to alien and various shades between. Tanner Mirabel, the mercenary protagonist, is joined in his quest by Quirrenbach a composer seeking to complete his magnum opus, Zebra a saboteur interested in restoring a semblance of justice to Chasm City, and Lorant a genetically engineered hyperpig just trying to survive in the mulch. In the parallel narratives we meet Cahuella Mirabel’s warlord employer on Sky’s Edge, his wife Gitta; and of course, filling the third storyline is Sky Haussmann the security officer of the Santiago.

Chasm City currently holds the enviable position of being my favorite Sci-Fi novel. It brilliantly weaves its disparate plotlines into a satisfying conclusion which made me want to imeadiately reread the novel to see what clues I missed and to congratulate myself on the ones that I had spotted. Perhaps my only complaint is that its pacing whipsaws back and forth between adrenaline-soaked adventure and didactic astrophysics lesson, especially in the last 20% of the story. But I like physics lessons, and if as Reynolds says “Life’s what you make it” I am thrilled to have discovered this book and lived vicariously through it.

For those who care about such things, here is my semi-arbitrary Parental Guidance Rating: 15+ for Violence and Graphic Language