Where is the Pyrrhic Phalanx Gone? — A Review of Legion Versus Phalanx

You have the Pyrrhic dance as yet,
Where is the Pyrrhic phalanx gone?
Of two such lessons, why forget
The nobler and the manlier one?

— Isles of Greece, Lord Byron - As quoted in Legion versus Phalanx 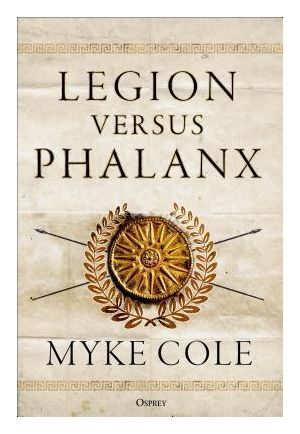 Legion versus Phalanx begins by asking a simple question. In a straight up fight which would win, the legion or the phalanx? (2000-year-old spoiler alert: The legion wins) The question explored in this book is: Why. Why did the legion ultimately triumph on the field of battle?

Myke Cole spends the first third of the book examining the historical evolution of the Roman Legions and the Greek Phalanxes, along with a detailed description of their fighting styles and equipment. The remainder of the book critically examines six major battles, in the 2nd and 3rd century BC, the events which preceded them, and their aftermath.

This book is primarily a work of narrative history, it has a story to tell, and it tells that story in style. It is not the ultimate scholarly treatise on Greco-Roman infantry combat, nor do I believe it tries to be. In the preface Myke writes, “[I]f I prize one thing above all others in historical writing, it’s accessibility.” and in this he succeeds.

The historical backdrop to the combat, the politics, feuds, and passions, are all brought to life in thrilling detail. Myke is careful to identify which parts of the story are speculation on his part, and which are clearly, or not so clearly, documented in the primary sources. His background as a novelist helps create compelling characterization, putting personalities to historical figures like Pyrrhus of Epirus and Lucius Aemilius Paulus.

The book provides the traditional bird’s eye view of the battles, explaining the troop movements and tactics. This is greatly aided by a nice set of maps found at the front of the volume. But, it is more than an armchair history. Using first-hand observations of the terrain, he drops you into the front line of the battle forcing you to consider questions such as: How would you charge down a slope while balancing an 18-foot pike? How would moving across uneven terrain impact the cohesion of a formation? As the battles unfold, you realize that 3rd century combat was, despite the best efforts of the generals, a chaotic maelstrom where victory or defeat could hinge on the actions of a single tribune.

In conclusion, this book is eminently readable, it is enthusiastic in tone, and it avoids the hagiography which too often biases the study of ancient warfare. My only gripe, and a small gripe at that, is the lack of inline citations. I want to clarify that I am not doubting the accuracy of Myke’s work; but having read it, I would enjoy being able to easily follow up on specific details and sources with further investigations of my own. As I said, a minor quibble. Considering the book’s stated goals, first to be enjoyable, and second to help the uninitiated learn new things, I would consider this book an outstanding success.