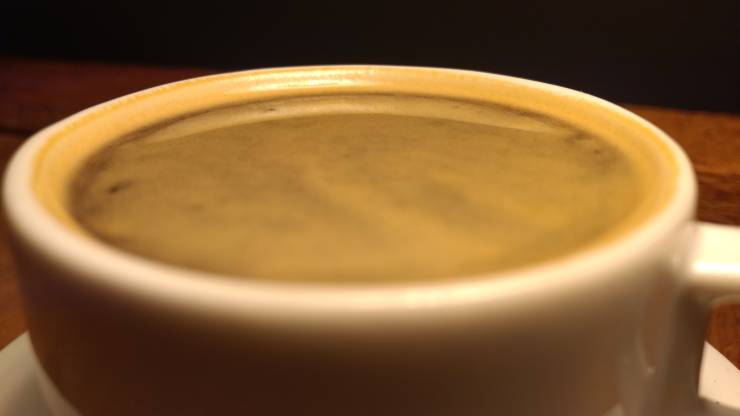 Note: This recipe is about twice as sweet as a typical Irish coffee. If that sounds unappealing cut the syrup in half.

Other Note: Metric measurements are awesome, and every kitchen should have a set of borosilicate beakers for measuring purposes.

It was the day after Christmas, I was 2000 miles from home in Cuernavaca Mexico. It was La Ciudad de Eterna Primavera and I was freezing to death. This was my own blessed fault I should have known that it would get cold in the evenings, but I had spent the morning climbing a mountain in 90-degree heat, so I can be forgiven for failing to pack a jacket in the evening.

Four of us were waiting poolside at the Las Casas hotel for more friends to arrive, with the ultimate goal of crashing the Marco Polo Italian restaurant for pizza; a fitting end to a glorious day of mountain climbing and archeological exploration. I was the only gringo in the group; and even though they tried to include me in the conversation, my Spanish was just good enough to get me into trouble and not nearly good enough to get me out.

However, menus were something I was rather good at reading. I began turning the pages, and after staring in horror at the $200 shots of Scotch, I decided to find something closer to my price range. Then I remembered that pesos and dollars both use the $ symbol, so it was only a $20USD shot of Scotch. That was still horrifying, considering $20USD would buy me a lifetime supply of street tacos.

One of my friends saw that I was still staring at the menu, and asked what exactly I was looking for. “Something with caffeine,” I had been up since well before sunrise, “and something hot.” I replied.

“Nesecitas una carajillo.” He answered, and calling the bartender over promptly ordered me one.

I surreptitiously looked back at the menu, verified this would not shatter my bank account, and watched as the bartender grabbed a bottle off the shelf, poured a generous measure into a cappuccino mug, then pulled a double shot of espresso over the top of the liquor. He handed it over; I took one sip and was immediately hooked.

So what is a carajillo? Folk etymology (the process of coming up with origins for words apart from rigorous scholastic methods) suggests that it is derived from the Spanish word for courage, and further extrapolates that soldiers would mix brandy or rum into their canteens of coffee before battle. This story is almost certainly rubbish, but it does explain what a carajillo consists of; a mixture of coffee and a sweet liquor, such as brandy or rum.

Nearly every Spanish speaking country has their own twist on this beverage. In Mexico it is made with Espresso and Licor Cuarenta y Tres. Returning to Wisconsin, I was initially unable to discover a source for this import liquor, and so I created my own version using ingredients readily available.

Thus came about the Carajillo de Wisconsin… made from locally sourced maple trees, because the sophisticated mixologist eschews simple syrup.