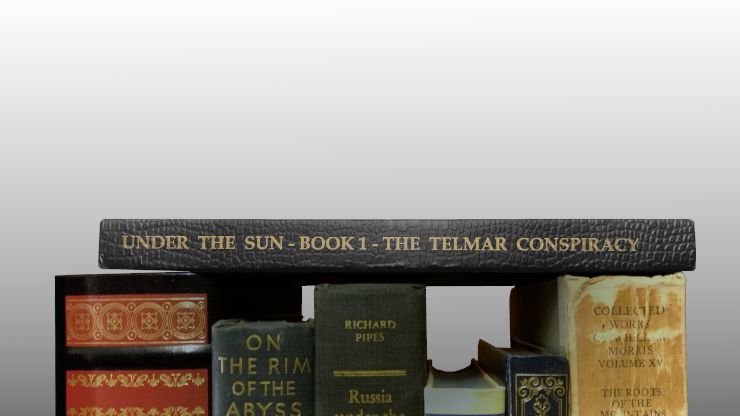 When you see the world not as it is, but as it could be, that’s when people say that you have delusions of grandeur.

There was no moon. Not that it had fallen from the sky or disintegrated in a meteor storm; it was simply hidden by the earth’s shadow. Of course, Dr. Warren Smythe was not paying any attention to the state of the moon. He was barely paying attention to the road which wound snakelike through the heart of the industrial park. He had more important things to consider. The CBW team was on the verge of success.

If their latest series of tests were validated, Canada would by default be granted super power status in the eyes of the world’s non-Canadian citizens. This was something which Smythe, long convinced of Canada’s innate superiority, desired greatly. Apparently, in the arena of international politics, size meant nothing. Population was a determining factor, as was economic influence; however, what truly gave a nation super power status was its ability to wreak death and destruction on fifty percent of the globe at the push of a button.

Warren pulled up to the brightly lit guard shack which secured the perimeter of the CBW Complex. “Let’s see some ID.” Mike said shining his flashlight through the windows of the car. Warren, as he had on so many previous occasions, handed him a holographic ID card. “Thanks, have a good night.” The guard said, passing the ID back. Warren rolled up the window of his car and pulled through the gate. There were only three other cars in the parking lot. The lab team had arrived early, beginning their work well ahead of the usual complement of managers and government personnel.

He swiped his ID at the reader and walked through the glass doors into the lobby of the lab building. He glanced at the front desk where a sign announced that no receptionist was on duty. Beside the sign was a list of phone numbers, allowing a prospective guest to reach the appropriate scientist. The truth was that there had never been a receptionist. There was no need for one, since any visitor coming through the gate had a security escort, but the sign allowed the lab to suggest an opulence which budget constraints had never allowed.

He strode past the empty desk, and down the long dark hallway which lead to the bio-secure area of the building. There was an airlock where he changed into his lab uniform, and then passed through into the lab proper. He was the last person to arrive, and after a few minutes of joking, the team got to work.

Several hours later, Warren was staring through his microscope at a tissue sample. “So, what’s it look like under the scope, boss?” Marlowe asked, dumping the contents of a beaker into the lab sink, causing a small cloud of potentially toxic green gasses to billow upwards like a fog bank.

“Well, I’d say we’ve got one nasty virus.” Warren answered his iron range twang causing some of the words to slur together unnaturally.

“Yeah, and exceptionally unstable, eh?” Ryan looked up from the centrifuge.

“Ok, tell Jacques to put the next batch in the Cryo-Sphere right away.” Warren ordered.

Jacques was in a class seven Hazmat suit. He carefully twisted the cap onto a thermos like bottle containing the latest viral sample. He waited as the air in the chamber was exchanged. The entire room was washed down and then bathed in strong UV light. Nobody was going to take any chances with the contents of that storage device. As soon as the cleanse period was over, he opened the door and stepped out of the safe room into the lab.

He carefully walked across the room and deposited his package in the Cryo-sphere. “What some terrorists wouldn’t do to get their hands on this?” He muttered in French as the door to the Cryo-Sphere slid shut with a sibilant hiss.

The words were singularly ill-chosen. At that moment, the lab door crashed open and three armed men entered. “Nobody move, and nobody gets shot!” The white-haired man in front shouted in a thick Irish brogue.

It was at this point, Dr. Warren Smythe had his first true misgivings about Project Chimera. Perhaps arming Canada with a virus, capable of eviscerating the entire planet, was not one of Parliament’s greatest ideas. Hopefully, these bandits were after the forty kilos of medicinal marijuana in cold storage.

The man’s next words dispelled any such hope. “Step away from the Cryo-Sphere!” He motioned with his gun. It was a revolver, which looked like it could stop a charging triceratops with a single shot. The scientists, Warren included, chose the better part of valor and backed toward the wall.

“I am a man who abhors violence.” The second person in the trio spoke. Belying his words was the Walther PPK, which he used to emphasize each phrase, waving it about like a conductor’s baton. This man was clearly in charge of the situation. Unlike the other two thugs, he wore a ski-mask, hiding his face. He spoke with an odd accent which Warren thought, sounded slightly British. “I do not want to see any of you hurt. All I want is the chimera strain.”

White-Head waved him back into line with his pistol. “The world will know soon enough.” He pronounced solemnly. To Warren this was all a bit melodramatic, as if the group had taken their lines from a 1930s detective film. By this point, Black-Beard had removed the thermos from the Cryo-Sphere and was backing toward the door, followed by the other two men. As soon as the door closed behind them, Warren ran for the panic button. There was still a chance that they could catch the men before they left the compound.

Alarms began blaring across the facility. The problem, Warren noted, with a panic button is that it sets off alarms, and yet fails to inform anyone what the panic is all about. For all that anyone knew, the lab could be on fire. Or somebody could have spilled a contaminated serum in the AC ducts, sentencing everyone within a quarter mile to a slow lingering death. If the Canadian Government left this place intact after this fiasco, he was going to ask for a PA system to be included with the panic button.

The alarms were not entirely necessary; a patrol of security guards had already discovered Mike’s body. They still were standing inside the guard shack when the sirens began to wail. The first guard was trying to call in the security breach, when the siren was overwhelmed by a roaring diesel engine. The guards looked up through the open door to see a white truck bearing down on the guard shack; like Moby Dick consummating his vendetta against the Pequod. They ran out of the shack, drawing their Berettas as they did so. It took the tiniest fraction of a second for both guards to decide that the driver had no intention of stopping for the lowered gate. They both opened fire simultaneously. It didn’t accomplish much.

Unlike Hollywood action films, handguns rarely stop vehicles in the real world. However, they do get people’s attention. Black-Beard swung out of the back of the moving van, his steel framed revolver gripped firmly in one hand. Fortunately for the guards, firing from a moving vehicle one handed is also much harder than Hollywood suggests. Bullets tore chips out of the concrete and shattered the glass windows of the guard shack without ever coming close to either of the guards.

White-Head sent the van speeding at the agent in front of the gate who dropped and rolled to the side microseconds before the vehicle smashed through the barrier. The guard, who was still standing, ran to the shattered gateway and fired one last bullet as the van pulled away into the darkness.